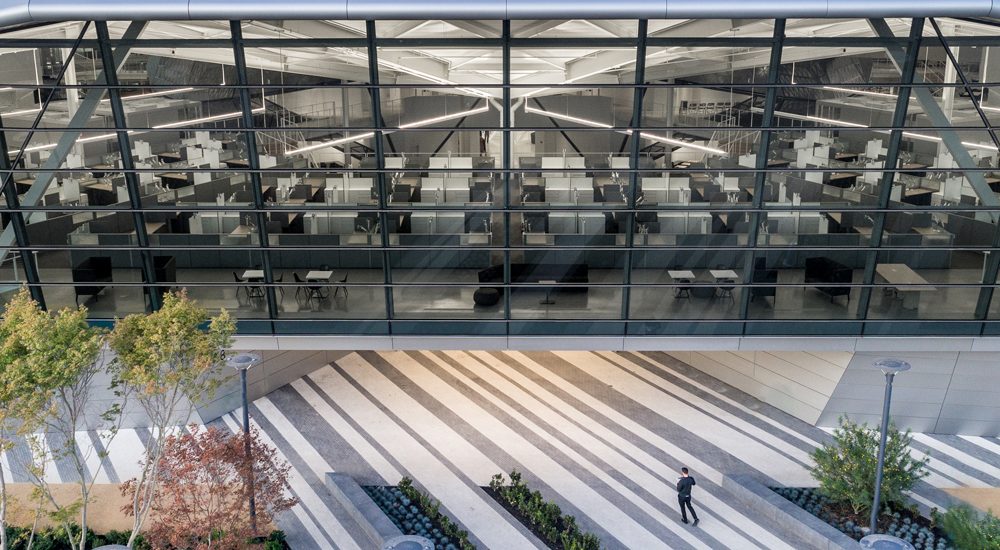 During planning, Kier + Wright provided mitigations to allow a pre-existing public water main on the site to provide water service to the first two phases of the corporate campus development. To facilitate the approval of the development’s proposed underground parking, Kier + Wright prepared plans to privatize the public water main, satisfying City of Santa Clara Water Department requirements that prohibit a development with underground parking from receiving water service from an on-site public water main. To comply with City requirements that prohibited the development from receiving water from a private water main on an adjacent property, Kier + Wright completed a lot merger that adjoined the Phase I and Phase II sites, allowing both phases to receive water from an on-site water main.

Kier + Wright’s design scope for Endeavor included the preparation of on-site and off-site utility plans that brought public and private utilities to the new building without interrupting utility service to pre-existing NVIDIA facilities on the 25-acre site that remained occupied during Endeavor’s construction. During the development of plans and during construction, Kier + Wright worked closely with NVIDIA, the general contractor and the City of Santa Clara to ensure that public infrastructure was maintained while existing utilities were relocated and new utilities were constructed.

The remaining five of the 25-acre site’s pre-existing 1980’s office buildings have since been demolished to allow the construction of Voyager, the 750,000-square-foot Phase II triangular building. Both Endeavor and Voyager are targeting LEED Gold certification.

A future project phase on Condensa Street will add an additional 11 acres of redeveloped campus to NVIDIA’s headquarters.

Kier + Wright also provided design and surveying services for the construction of the 19-acre NVIDIA campus across the street at 2701-2741 San Tomas Expressway.