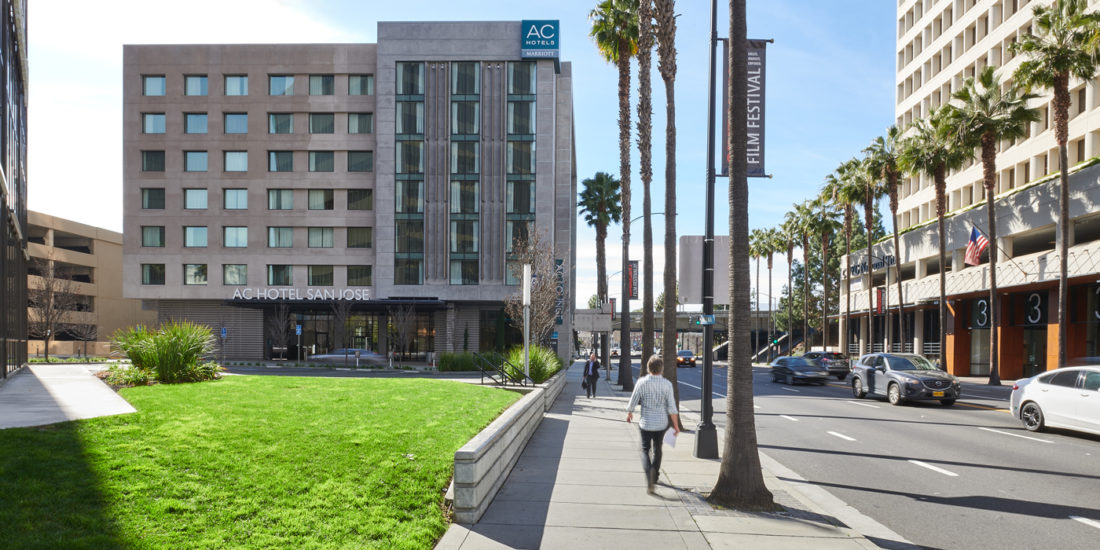 The seven-level, 210-room hotel was the first new hotel constructed in downtown San Jose in over a decade, was the first outpost of Marriott’s European-inspired boutique AC brand to open on the West Coast and is San Jose’s first LEED Gold-certified hotel.

The developer initially intended the site for a different hotel. Significant redesigns were necessary to update the site plan to accommodate the higher-occupancy, more modern AC Hotel. Kier + Wright provided design revisions on an accelerated timeline to update and amend permit documents in conformance with the construction schedule.

The 0.5-acre site is situated between a pre-existing parking garage, state right-of-way and City of San Jose right-of-way. The U-shaped hotel contains a courtyard on the south side of the site, within which a historic adobe foundation is buried and preserved. The project’s design consultants coordinated with an archaeologist to ensure that the approved designs protected the adobe foundation and that the foundation remained unharmed during construction.

Kier + Wright design solutions to address the unique site constraints included drainage to be routed beneath the building out to the City frontage. Additionally, Kier + Wright’s scope required the preparation of FAA documents due to the hotel’s proximity to the airport and the preparation of an ingress/egress easement to provide access to the pre-existing parking garage. Off-site scope included frontage improvements and ADA upgrades along West Santa Clara Street, sidewalk improvements, and preparation of the layout for relocated ticketing gates at the entrance of the neighboring parking garage.